“Thank you very much for bringing Quint to Upstairs at the Western.
It was great fun to introduce a full house to the mysteries of Traffic Wardening
and a joy watching the audience alternating between tearful laughter and cringing
disbelief as Quint attempted to encompass political correctness. You’ve introduced
UatW to a new genre: observational drama.”
Gary Phillpott,
Artistic Director, Upstairs at the Western, Leicester 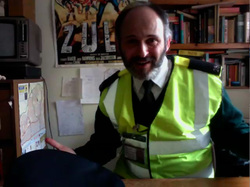 He started out as part of a theoretical dramatis personae for a TV project about the traffic control industry, and he might have remained just that – part of a half-formed idea scribbled in one of my many notebooks – had it not been for Sami Abusamra and David Chrysanthou; they were planning an online satire of “vlogging” – the phenomenon whereby people plonk themselves in front of webcams and disseminate their humble opinions, unbidden, to the world.

I was one of several actors invited to develop a character for the project, and I decided
to give birth (metaphorically) to Kevin McBride, popularly known (at least to those who'll accede to his request) by the nickname “Quint”.

Quint is a traffic warden with issues; issues about traffic, of course, but about much more besides – for, like many people, Quint's finding it hard to adjust to the pace of change in the early 21st century. Apart from his estranged wife, his “creative” son Tom, and his continuing resentment about the cuts that saw him ejected from the Army some years before, Quint finds himself particularly distressed at the standards of loyalty he finds among colleagues and management when he's subjected to the attentions of a mystery man (or woman – let's not be sexist) with an air gun. Quint, after all, is simply trying to do his job – a job on behalf of the whole community; that sniper – it's not Quint he's attacking, it's the whole community: he's killing a dream!

Anyway, back to the point. My contribution to Vlog Roll (for so it was called) was filmed in spring 2012 (a small sample can be seen here), but after a year spent developing said contribution, I found I was in too deep. I decided therefore to adapt the misadventures of Quint for presentation on stage, swapping his webcam audience for a classroom of new recruits – played by whoever happens to be in the audience that night. No need to worry, though, for any potential punters: audience participation is minimal in High Vis, and no-one gets dragged up on stage. Share the limelight? Quint would never dream of it.

Postscript: Spring 2020 saw Quint once again relieved from duty, and once again taking refuge in the world of vloggery – hence Keeping the Faith, a series of short videos documenting a warden’s lockdown experience.
Interested in a visit from Quint? Get in touch with Robert Cohen at bobbycoco@gmail.com
Meanwhile, you might like to have a look at the Facebook page right here.