The facts behind the making of The Trials of Harvey Matusow

Virtually unknown on this side of the Atlantic, Matusow’s name was at one time almost as infamous in the US as that of Senator Joseph McCarthy, with whom he was briefly associated.

He started his political career as a communist, joining the CPUSA in New York in 1947. However, despite his success at selling subscriptions to the Daily Worker (it won him a trip to Puerto Rico), he became disillusioned and signed up as a stoolpigeon for the FBI. Ratting out his former friends proved lucrative, and before long he was working full-time as a professional witness: clients included the US Justice Department, the House Committee on Un-American Activities (popularly known as HUAC), the blacklisting agency American Business Consultants, and Senator McCarthy, to whose re-election campaign he proved instrumental.

In all this, Matusow was far from unique – the ‘McCarthy’ era bred a number of well-paid star supergrasses; what set Matusow apart was the development of a conscience. He was eventually to recant almost all of his testimony and serve three years of a five-year sentence for perjury.

TIME AFTER TIME
Though never again to be either as famous or as infamous, Matusow, in his life post-jail, continued with varying success to seek the limelight.

Actor, comedian, advertising copywriter, clown, BBC broadcaster, avant-garde musician, art curator, puppeteer – all these things and more, at one time or another, was Harvey Matusow. By the time he died in 2002 he had traversed the globe, married 12 times (albeit only to 11 women), and drifted into the orbit of such as Yoko Ono, Norman Mailer, Brian Eno, Michael Nyman, the Dalai Lama, John Cage, and Robert Cohen’s Auntie Sheila (though she only knew of him, during his sojourn in Ingatestone, Essex, as the man who buried pianos in his garden). 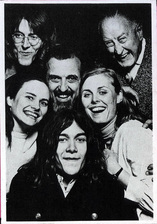 THE FILES OF HARVEY MATUSOW
Matusow was an almost compulsive self-archivist. He kept pretty much everything – letters (of which there were a very great many, especially during the prison years), photographs, theatre programmes, bumper stickers (‘Re-elect McCarthy’), newspaper clippings, engagement diaries, drawings – and when in the mid-’60s he left the US for England, he took his archives with him, by the caseful. He was ultimately to give his papers to the University of Sussex, and it was there, in the Special Collections Department, that The Trials of Harvey Matusow was researched.

Directed by Ralf Higgins (veteran of the celebrated physical theatre company Kaos), the show was previewed in the spring of 2010 at the Web Theatre, Newtownards, and after being cut, shaped and in all ways fine-tuned, it received its world premiere at that year's Brighton Festival, earning a Best Actor nomination for Cohen and acclaim from such as Plays International, whose correspondent declared it “the best one-hander I have seen all year”.

“Not only did you vividly evoke someone I knew very well over the course of many years, but it was also excellent theatre.  I admired  the clever way the evening was structured, packed as it was with psychological insights as well as historical context.”
Dan Snowman, Harvey Matusow’s BBC producer, on The Trials of Harvey Matusow

If you want to know more, perhaps with a view to hosting a performance of the show, contact Robert Cohen at bobbycoco@gmail.com

MATUSOW in pictures - fact and fiction