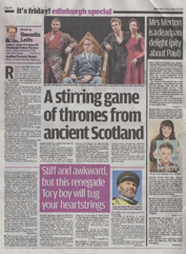 DAILY MAIL – Quentin Letts
Robert Cohen's one-man show High Vis (King James Hotel) does for traffic wardens what The Office did for  paper-pushers in Slough.
Running at an hour, it could probably lose 20 minutes, but the character of disaffected traffic warden Kevin ‘Quint’ McBride is inspired.
Warden McBride is a failure in love. He is shunned by colleagues and shot at by a sniper in the  streets. Yet he sees himself as a ‘centurion’ of justice and loves nothing  better than ticketing a line of yummy mummies’ four-wheel drives.
Terrific stuff.  Ricky Gervais could make millions from such an act. 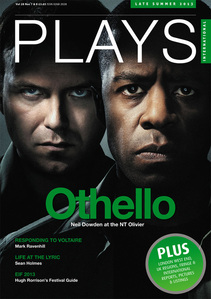 PLAYS INTERNATIONAL – Jeremy Malies
Brighton actor/writer Robert Cohen satirises the privatisation of parking regulation in British cities and shows us a self-aggrandising delusional parking warden who has been taken off active duty as a result of behavioural problems during street patrols. He is now assessing candidates for warden duties and we, the audience, are the applicants who want to progress beyond being civilians in order to “bring justice to the streets”.
This neat structural device allows Cohen to poke fun at the Walter Mitty elements of his character while making wider points about wardens who see themselves as an extension of the police force and, in some cases, claim quasi-military powers. This defrocked warden is still useful to his employers for his willingness to spout horrific business jargon on behalf of a parking company who must report to the council as if they are a commercial contractor.
It's this documentary element which is the most memorable element of High Vis, though as a writer Cohen has lavished much care on the delusions of a creation who has reinvented himself with a character name taken from the film Jaws. “Quint” describes the work of a warden as a craft and sees parallels between urban parking policy and Western intervention in the first Gulf War.
Cohen’s previous subjects have included a Communist quisling during the McCarthy trials and the circus community in the United Kingdom. His writing is always observant and success with this breadth of subject matter continues to underline his skill as a performer.

Click for full review
LATEST 7 – Andrew Kay
Robert Cohen beautifully creates a world in which Quint, his middle-aged ex military traffic warden, can no longer happily exist. Not that Quint is accepting this, no way, Quint is out there to stand up against the air rifle sniper and cling to the wreckage of his life as he is abandoned by his wife, barely tolerated by his gay son and mocked by his work mates. Cohen writes with skill, the monologue flows with ease, the misogyny, homophobia and sundry other outmoded views are dropped into Quint’s world by a deft hand and are delivered with equal skill. Indeed Cohen as performer is as accomplished as he is as writer, delivering the lines with an energy and sense of realism that sometimes, in this school room style performance with the audience as budding new traffic warden recruits, seems all too real, his terrible anger surfacing through the despair of not being ‘understood’. Robert Cohen’s ability to balance the comedic with the tragic is superb and whilst this hour of Quint is rounded and complete I craved more, especially when TV comedy is currently seeing such a terrible low. This compact production, so well realised, is the stuff that makes Brighton Fringe so worthwhile – more High Vis please and more Quint!

ARTS & ENTERTAINMENT NORTH DEVON – Amanda McCormack
The self-nicknamed Quint (after the fated Jaws fisherman) may wear the badge of a Civil Enforcement Officer but he is clearly an old school traffic warden with a flimsy hold on political correctness. Quint, the creation of Robert Cohen, in his one man show High Vis, is endearing in his pathos and Cohen's performance is captivating.
High Vis is really laugh out loud funny, the writing is superb and I never doubted for a moment that Robert Cohen was Quint himself. I found myself curbing my laughter though, as there was a constant air of suspense and a fear that tragedy was just around the corner.  Just brilliant!

FRINGE REVIEW – Paul Levy
This is no cartoon character but a real soul with bits and bobs that mark Quint out as authentic. I’ve met Quint. He exists. And that believability marks this out as a show of quality – character theatre, tinged with bitter comedy, but rooted in the real. Cohen doesn’t overplay or exaggerate – he draws on the essence of Cohen and transposes it into a character that is close physically to him, yet is psychologically a creation of vital difference. This is the sort of skill that Peter Sellers had, and so did Leonard Rossiter.
A man who pays as he goes and ends up paying in other ways, there’s a tragicomic hint of David Brent in this character, and a lot of the comedy arises from the contrast between statement after statement and a lack of true self-awareness in Quint himself. His self-knowledge is tragically selective. Quint lectures us, rants at us, trains us in life (and the craft of the traffic warden), asks questions, reflects, philosophises, complains, asserts and retracts. The great street that is Quint’s mind is double-parked with endless cars, vans and lorries of thought, doubt and dissatisfaction. It’s a show about meltdown, full of thought and feeling traffic, and many members of the human race, perhaps even the Creator, have parked on the double yellow lines of his soul. A beautifully crafted and realised character, and the powerful theatre is to be found in this depth study of mundanity. Detail found in humorous observation realised through direct monologue.
... Each time I see Robert Cohen perform, within moments I’ve entirely forgotten it is Robert Cohen. That’s good isn’t it? Very,
very good.

WEST PARK GAZETTE, LEICESTER – Paul Towers
With a wide array of malapropisms and mangled corporate-speak, Quint struggles to maintain a sense of worth in the world of Parking Enforcement. Raging against the world as he serves out his enforced grounding in the Training Room, Quint tries desperately to be PC but repeatedly trips over his feet as he side steps his accidental bigotry. Pathos and comedy mix as the evening progresses.
Armed only with his High Vis jacket, a flip chart and an array of marker pens, Quint is isolated out of the way of a sniper, supposedly stalking the High Street picking off Traffic Wardens.
Channeling both Leonard Rossiter and Alan Partridge, Cohen expertly draws a picture of an exasperated man kept from his own small kingdom, the vehicle strewn streets of his town. The iniquities of his life wind him up further and further until he is forced to withdraw and rest._
Robert Cohen's expertise extends beyond the script and he expertly ad libs, drawing the audience into the world of Quint. Be warned don't arrive late or sit in the front rows. You will be abused!

BROADWAYBABY.COM – Dale Phoenix
To start off with, sitting in close quarters to a middle-aged obsessive instigating a training course for aspiring traffic wardens is about as entertaining and riveting as can be imagined. However, with just a flip-chart and mobile phone, Cohen manages to bring Clint and his milieu to life. As the performance went on, I found myself becoming enthralled in the world of this sad, strange little man to the extent that I left asking more questions than I would ever have imagined.
It is undoubtedly hard to discuss much of this performance without giving away the changes in mood and tone that are provided with each new revelation about Quint’s life. However, the piece certainly provides its audience with a plethora of emotions that relate to anyone who has juggled family, work, life and loss in contemporary British life.
Whilst certainly not a-laugh-a-minute, “High Vis” is in the spirit of “Coronation Street” or the great British Kitchen Sink Drama in that it scratches the surface of the salt-of-the-earth Northerner in ways that are both highly comic and bleakly tragic. Whilst some of the tangents on which he goes off are perhaps a little too irreverent, there is generally an astute observance of modern life in much of what is delivered.
In short, High Vis is very much like the traffic wardens on which it is based in that it unexpectedly sneaks up on you. However, this piece will leave you with a spring in your step rather than a hole in your wallet, even if it does take some time to get there.

REMOTEGOAT – David Rumelle
This superbly crafted one man show/tragicomedy grabs its audience from the very start!
On a cold Thursday evening, an hour and a half’s monologue about the perils of a traffic warden may not have seemed to hold much appeal. However Robert Cohen’s tour de force as Quint McBride – civil enforcement officer – tackles so many issues and covers such a gamut of emotions that the evening flies by at a cracking pace.
Cohen’s piece works on all levels – as an entertainment, an education and ultimately as a thought provoker.
Due to an unfortunate “grounding”, when he’d much rather be out on the job, Quint is reduced to giving training lectures. This gives rise to his obsessions, outbursts, prejudices and mental breakdown. But that is only a minimal summary. Add to this issues of homophobia, racial prejudice and sexual harassment (to name but a few), and you have some idea of what is crammed into this absorbing hour and a half.
Cohen’s skilful writing and portrayal ensures Quint is a fully developed character, in which we see prejudices, foibles and vulnerability, and he never becomes a caricature for a moment. Just when we think we’ve made up our mind about this man, another facet is thrown into the arena – and we are constantly making a re-assessment of his – and indeed our own – attitudes, so his character becomes somewhat a mirror, held up for us all to examine our reflection.
There are some superb moments of black comedy within this lecture on “Civil Enforcement officers” (I will never call them traffic wardens again!), particularly a hint at the best time to catch offenders and slap on a succession of parking tickets (I'm not giving the game away – you'll have to book a ticket!).    For anyone planning a solo presentation – I urge you to catch this master class in writing and performance.

DRYSTONE RADIO, YORKSHIRE
Hollie Cooper
Quint is an hilariously tragic but loveable character. Part of you hopes the best for him, but secretly another part hopes the worst - just so you get to hear more of his frustrated tales. Either way, like a friend, you wonder how he will be doing in the future. Brilliant and believable show. Must see.